Star turn: How print is adapting in the face of a pandemic

Anyone wondering how print publications are evolving during the Covid-19 outbreak need only look to the stars. In June, actress Drew Barrymore joins a growing list of celebrities bringing out glossy lifestyle titles. An “optimism magazine” that comes out quarterly and has a hefty $9.99 pricetag, Drew is a print product for our times. With so much of our lives spent online, magazines are increasingly becoming something to savour.

“Nobody buys something for $8 to $10 as an impulse item,” Professor Samir ‘Mr Magazine’ Husni, founder of the University of Mississippi’s Magazine Innovation Center, told The New York Post in a recent interview. “They are buying it because they want the experience that the magazine can deliver. People still believe there is a need for print. People are bombarded by bad news and they are looking for diversions.”

Magazines born during Covid offer just that, not just with its escapist content, but through its high production values. With covers becoming thicker and paper quality improving, new titles feel like luxury items and it’s an indulgence many are happy to pay a bit more for. The average price of the titles launched in the US in 2020 was around $8, up from $5. It’s a pricetag, says Husni, that’s helping to pay for a “premium aura” around the titles.

With new launches relying more on subscription sales than ad dollars, the titles have not been hit as hard by a drop in print advertising “There is a new business model,” explained Husni. “The new trend is high subscription and newsstand prices and very little advertising.” 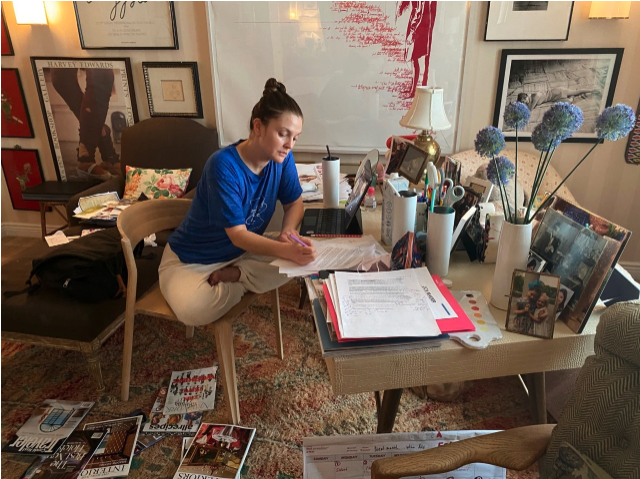 In addition to Drew, brought out in partnership with Bauer Media Group, recent celebrity titles in the US include two lifestyle magazines by Meredith Corporation - Ayesha Curry’s Sweet July and HGTV stars Drew and Jonathan Scott’s Reveal – and offerings by fitness gurus Tracy Anderson, who started Tracy Anderson Magazine, and Denise Austin who launched Denise Austin’s Fit Over 50 with Bauer.

“From legacy publishers like Meredith and Dennis Publishing to the brave entrepreneurs who dared to make their dreams come true… the magazines born during a pandemic proved once again that print is something people wanted and needed in their lives,” says Husni on his website.

Quality across the pond

In the UK, magazines launched in the most trying conditions have also tended to be a bit more expensive. According to a study carried out by Wesseden Marketing the average cover price of all 2020 launches jumped by 11 per cent year-on-year to a record £4.52. This is in comparison to the £2.23 price seen in the whole magazine market, and an indication that print magazines are increasingly premium-priced.

While the number of magazine launches in the UK decreased by almost 60 per cent in 2020 to 113 regular frequency titles, figures are encouraging when weighed against the structural trends in the industry and the effects of Covid.

“Given the horrendous trading conditions, to see 113 new products come on to the newsstands shows that the magazine business is still very much alive,” Bilton points out. “Yet it continues to change rapidly. True digital-only magazine launches are rare. The vast majority have a print companion alongside digital platforms.”

While many magazine businesses have been looking at managing decline over the last five years we are in this really beautiful position of actually now looking at how do we manage this growth.

Bringing comfort to the masses

The type of magazines launched during the pandemic has reflected Covid’s huge impact on our daily lives as lockdown heralded in a period of self-reflection and self-improvement. In addition to celebrity influencer publications, titles devoted to food, fitness and the home have been all the rage in America. With schools closed for long periods at a time, children’s magazines dominate in the UK, with gardening, cookery, health and fitness and mindfulness also being hot categories.

The demand for lifestyle magazines goes beyond the need to study up on new hobbies. Many have found the tactile experience of holding a print magazine comforting during uncertain and stressful times.

“There something really pleasurable about sitting back and holding a magazine, even better if you’re in a garden,” says Lucy Hall, the editor of BBC Gardeners’ World magazine, which saw a 33 percent year-on-year increase in readership in the second half of 2020. “What has emerged in the last year is everyone’s increased need for wellbeing and health and feeling they are doing something for themselves – this need for nurture. And we are in that cycle of helping people through that.

“Gardening is such a rare, pleasurable part of what we have gone through together during lockdown. And there is every sign that people are continuing with it. While many magazine businesses have been looking at managing decline over the last five years we are in this really beautiful position of actually now looking at how do we manage this growth.”

These days everyone’s favourite metric is engagement, and yet there’s nothing more engaging than a well-made magazine

With the fitness sector also going through a boom period, Men’s Health UK has  forged an even closer relationship with readers through its print magazine.

“These days everyone’s favourite metric is engagement, and yet there’s nothing more engaging than a well-made magazine,” says editor-in-chief Toby Wiseman. “It’s an argument backed by the 59 per cent year-on-year increase in Men’s Health UK print subscriptions last year.

“Different platforms engender different kinds of consumer behaviour – the challenge of an editor is to work out what kind of content suits which one best.”

Hugely encouraging for magazines is that younger generations are increasingly falling for the charms of print.

“The Vogue global reader print profile indicates that half of the readers are aged 16 to 34. This kind of data is just a part of the big picture we are analysing and working with, including many more sources and perspectives that help us make our business and strategic decisions. “

It’s not only big publishing houses appreciating the value of print. According to the Wessenden Marketing study, “The real creativity in magazines is currently coming from the smaller, ‘passion publishers’”.

Leading the way is independent magazine publisher Iceberg Press, the company behind The Simple Things and Oh, gorgeously produced titles dedicated to occasionally downshifting and savouring what life has to offer.

A big part of Iceberg Press’s success has come about through a steadfast refusal not to compromise on quality - upping paper quality and pagination in the belief that people would pay a bit more for a superior product. They were right – with the company enjoying a phenomenal rise in subscription numbers as readers craved some comfort reading.

“Normally people get comfort through their family who weren’t around during the lockdown,” says Iceberg Press co-founder Lisa Sykes. “So people found comfort in their belongings, their pets, pastimes and projects, which happen to be the things we cover.

“And these things won’t disappear after the pandemic because people have tasted a different lifestyle. People have found more of a balance. It’s not all about going out, but about doing things and experiencing things.”

An old dog with some new tricks

Over the last year or so print publications have certainly offered readers some singular experiences as the latest edition of FIPP’s Innovation in Media World Report shows.

In late spring 2020, the front page of Finnish newspaper Helsingin Sanomat was an unreadable blur. Until you stepped six feet back to see that it was a print ad tied to the news that the government would be relaxing some Covid-19 lockdown restrictions, with the message: “Keeping it safe. From a distance.”

Showing that print can lend itself to interactive marketing, a Finnish mobile operator Telia launched an ad that became a video game when readers took a picture of it with their mobile phone, opened the Telia app, and placed the phone on the ad. The phone’s screen became the game board, with players putting their fingers on the print ad and, when the phone screen changed, seeing who can be the first to tap the screen.

And then, in what was a hugely creative move, Indian newspaper Dainik Bhaskar published the front page of a 204-page anniversary edition in cloth. Marking the paper’s 15 years in the city of Bhilwara, the “Textile City of India”, the unique edition gave readers the perfect collector’s item – a reminder that, faced with an existential crisis, print publications are really stepping up their game.

This article is part of the #PRINTISTHENEWBLACK series, a content collaboration with FIPP, showcasing the role of print in the modern media mix.

Sustainability in the paper industry

Our approach and perfomance