Circularity, fuel efficiency, and sustainability: A first look at the combined heat and power plant at UPM Nordland Papier

How can an energy-intensive company help to successfully implement the energy transition, reduce CO2, position itself for the future while improving profitability? Klaus Reimann (R), General Manager at UPM Nordland Papier, and Peter Reisige (L), Project Director for the new combined heat and power (CHP) plant at UPM Nordland Papier, explain how this has been implemented at the Dörpen site and what opportunities lie ahead.

Founded in 1967, UPM Nordland Papier is the biggest fine and specialty paper mill in Europe, producing up to 1.2 million tonnes per year. Paper production remains an energy-intensive industry, so the key to a long-term viability in the face of global climate change is to address energy use efficiency and the overall energy concept of each production site. With the new CHP plant, Nordland continues to actively address these topics.

The volatility of the grid is a key motivator for the construction of the highly efficient 84MW gas fired plant at Nordland, which will partly cover the mill’s heat demand and enable active participation in the increasingly volatile German electricity markets. The power plant supports the energy transition as it can provide flexible generation capacity at short notice when the sun is not shining or the wind is not blowing. This strengthens the stability of the entire power system. “Wind and solar energy can fluctuate depending on the weather.” says Peter Reisige, Project Lead for the new CHP plant. "We can balance this volatility with our new CHP and therefore help to stabilize the network.”

The official inauguration of the plant took place on November 3rd. However, the CHP production test run took place already in August, and power has been fed into the grid from this point on. By integrating its own energy generation with the paper production, UPM can operate the gas-fired power plant with a very high level of effectiveness, and its CO2 footprint is reduced by approximately 300,000 tonnes per year in Scope 2 emissions. “The power that we are producing here generates significantly less CO2 compared to the German electricity mix."

Previously, the steam required for paper drying was generated by the combustion of natural gas in the mill’s own heating plant. This was already some time ago enlarged by a new boiler using electricity for steam generation. This can be operated when feasible, in case there is too much renewable energy in the network and only limited demand.  “It’s an instrument which can use the volatile renewable energy to generate steam. This steam is used to dry paper in our production process, which creates savings in the use of fossil natural gas," explains Klaus Reimann, General Manager at UPM Nordland Papier.

As an energy-intensive industry, the plant not only consumes energy, but sometimes also generates more energy than it needs. Being connected to the grid enables UPM Nordland to feed surplus energy into the municipal electricity grid. “We have been more active in the energy market during the recent years. For example, in former times, it was unthinkable that we could shut down the complex paper machines in 15 minutes, which would reduce the demand of steam and energy to stabilize the grid,” says Reimann. "With the increased flexibility, this is no longer an issue. In the future we can actively participate in the energy market both with supply and demand".

What’s more, the CHP plant at Nordland is highly efficient in comparison to other power plants. “Fuel efficiency means how much gas we need, to produce a certain level of steam and power. Many plants operate at around 50-55% efficiency. Since the Nordland CHP captures and uses the heat for paper drying, it is very fuel efficient, up to 90%,” says Reisige.

In the paper mill, there are several paper machines using steam for drying. The exhaust gases are used to generate steam at very high temperatures and pressures. This in its turn is used to drive steam turbines for further power generation and the low-pressure steam is subsequently utilized for drying the paper. Major new piping installations now connect the CHP, heat boilers and electricity boiler in an intelligent manner with the paper machines. As a whole, this was a major feat of engineering for the Nordland team and their suppliers. 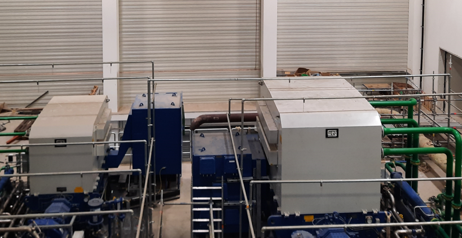 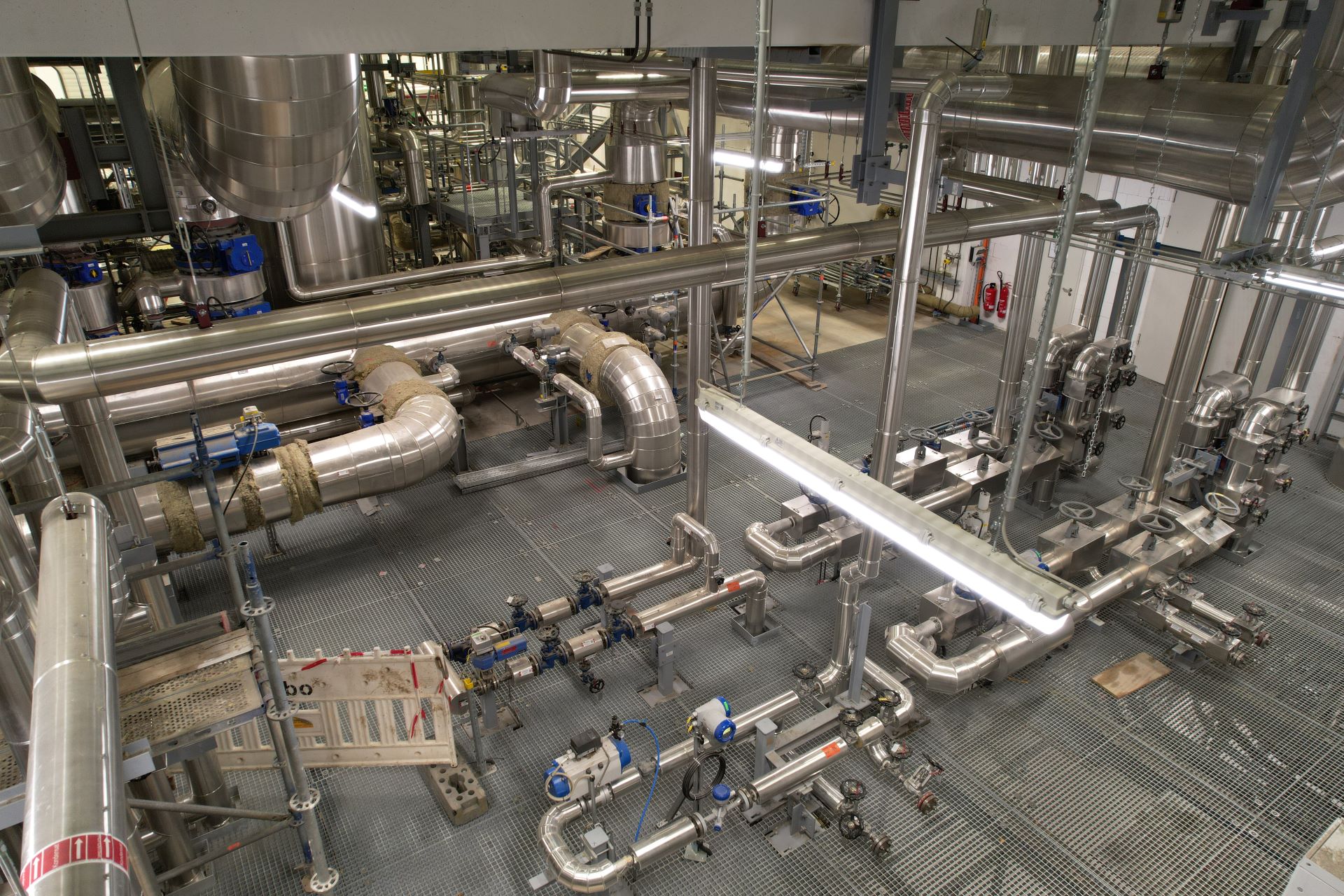 There is also a new water treatment plant for the CHP. This new equipment now makes pure water for the CHP as well as for the existing boilers. The main feed is the backflow of condensate from the paper machines. Therefore, only very little amount of additional water needs to be added.

In general, our water usage is a benchmark for the paper industry.

Water usage has always been high on the agenda of UPM Nordland Papier. There is even a plant treating cleaned wastewater to use it again in the production process by osmosis and ultrafiltration.

“In general, our water usage is a benchmark for the paper industry. We have a lot of reusage, cleaning stages and intelligent water management, utilizing our multiple paper machine production site,” Reimann explains. The team is committed to minimising water wastage and maximising production efficiency by implementing circularity where feasible. 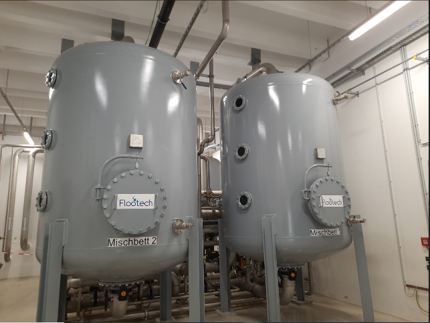 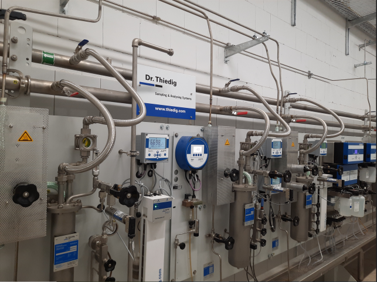 Ready for the hydrogen economy

The government target is for renewables to reach 80% of electricity demand by 2030 and hydrogen is expected to play a significant role in Germany in the future.

“Our gas turbine is able to operate with H2,” Reisige shares. “With adjustments to the turbine, we will be ready for the transition to hydrogen in the future and produce CO2-free power.” The piping infrastructure that connects the plant to the grid has also been built with H2-readiness in mind. “In the next years, we will most probably start to see a mixture in the gas of hydrogen and fossil fuel gas, but the existing assets are also prepared for 100% hydrogen and is therefore future-proof."

Much of the development for the CHP plant was undertaken during the restrictions imposed by COVID-19, requiring daily testing for employees and digitisation of meetings to accommodate for the unprecedented events of 2020 and 2021. “For me, I am proudest of three things,” explains Reimann: “No accidents and a very good safety performance; being on schedule with production; and delivering the project to budget. We are already seeing very good results from the outset of production of the CHP plant – not only for the paper production, but also as an integrated part of the mill and the opportunity to help shape the energy transition as an energy-intensive company."