A new age: Terena le Roux talks about changing the face of magazines for over 40s in South Africa

Terena le Roux has long been frustrated with the content of magazines aimed at the over 40s market in her native South Africa. “It’s all chairlifts and adult nappies,” says the publisher. “Sorry, but I’m in my 50s and I’m not vaguely interested in that. It sort of makes me feel angry when people speak to someone my age that that’s where they go. It’s like they skip 40 years.”

Terena le Roux started her career as a journalist at daily newspaper Beeld before becoming the fashion editor at Rooi Rose and editor at Woman’s Value. She was appointed Editorial Head for Creative Living Magazines (WV, DIT, Tuis & Home), during which time she re-branded Woman’s Value and DIT to Ideas and Idees. In 2009 she returned to the editor’s chair at Ideas/Idees and became owner-editor of the magazine in 2016. She launched Journal/Joernaal magazine in late 2020.

Le Roux has channeled her annoyance into Journal/Joernaal, a bilingual seasonal magazine published in English and Afrikaans that promotes the concept of ‘positive ageing’. Featuring a vibrant, quirky design that makes it stand out from the competition, the publication is a mixture of long-form reads covering health and mindfulness, food ideas, book reviews and puzzles to keep the mind sharp.

“If you allow it, you can just drift through life, so it’s important to actively engage for as long as you’re here,” says Le Roux, who is also behind successful local lifestyle magazine Ideas/Idees, catering to the country’s creative community. “And that’s what I want to achieve in the magazine - I want to give people articles that keep your brain going and help you make plans for a positive and active life. You want to be that person who, when you’re sitting having sundowners, you have something interesting to contribute to the conversation.” 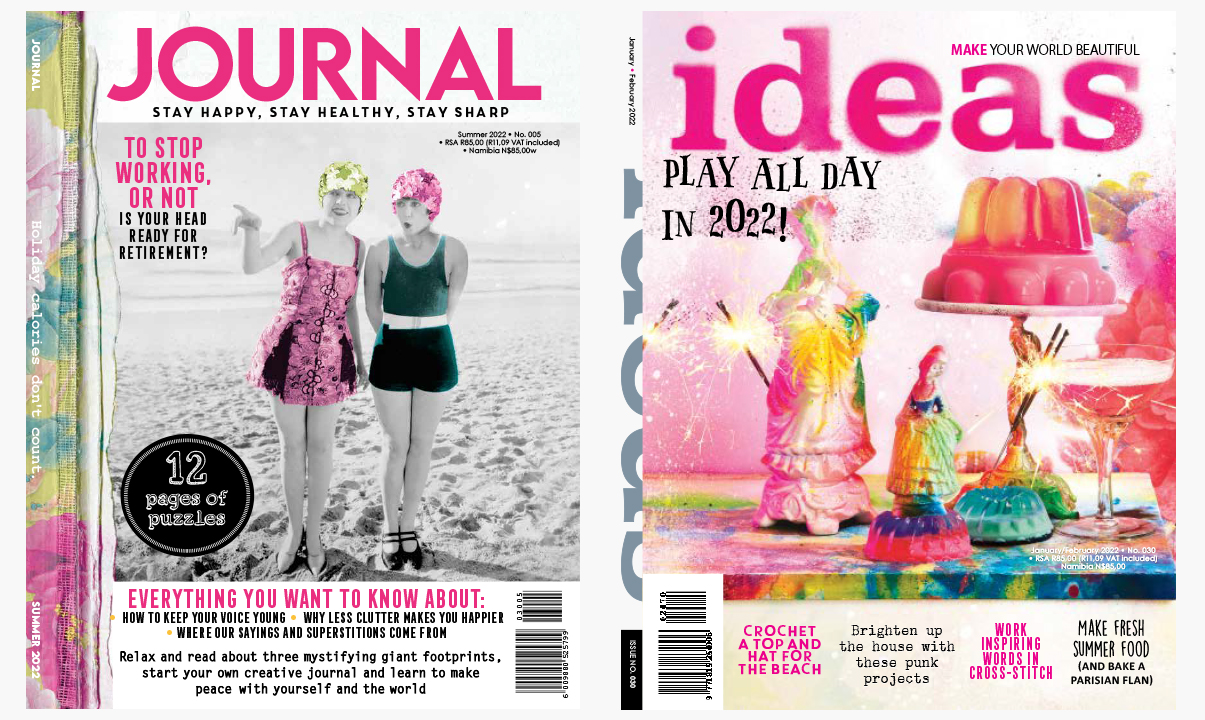 Journal/Joernaal not only looks towards the future but also the past. The magazine suggests readers reflect on their life by assembling a number of prized items and taking a photo of them. Le Roux got the ball rolling herself in the launch issue with her ‘self portrait’ featuring vintage gloves she bought in Venice, tickets to a Bob Dylan concert she attended in London while pregnant, and a 1850s engagement ring from Paris.

“I’m a big traveler and I try and collect things wherever I go, so the photo represents my love of travel and vintage,” she says. “By doing this I have a picture I can pass down to my son that shows his mother in every single thing. These self portraits are in a nostalgic part of the magazine that uses retro styling, which the younger generation loves as well.”

It’s a look and feel that has turned the publications into collector’s items.

The importance of print

Both Journal/Joernaal and Ideas/Idees are aimed squarely at people who love the tactile experience that comes with print publications.

“I have two markets I aim for – the creative market who wants to touch paper and work with their hands as well as the Journal/Joernaal reader, who are people who grew up with print and a love for magazines. Either way, we aim specifically at paper lovers.”

A critical part of the success of Journal/Journaal and Ideas/Idees has been its high production values – the magazine featuring great paper stock and top design and illustrations. It’s a look and feel that has turned the publications into collector’s items.

The readers don’t mind paying more because it feels like a luxury item.

“When readers discover the magazines, they want to go back and get the previous issues because of the way it has been put together,” says Le Roux. “The feedback that I get from readers is that they don’t mind paying more because it feels like a luxury item.

“I think that’s the future of print publications in South Africa. We’ve had a lot of new magazine in the country and most of them are very niche from small independent publishers and with production values that are excellent most of the time.”

Operating in a tough neighbourhood

Le Roux launched Journal/Joernaal at the end of 2020 during one of the toughest periods for the local publishing industry. Early in the year, Associated Media Publishing (AMP) - which brought out Cosmopolitan, House & Leisure and Good Housekeeping - was forced to close its doors after 38 years due to the impact of Covid-19. Around the same time Caxton & CTP Publishers & Printers announced it would stop printing some of the country’s most iconic titles including Bona, Garden & Home and Rooi Rose.

With many of the magazines that have closed down being put up for sale, Le Roux contemplated becoming the owner-editor of an existing title – something she did in 2016 when Ideas/Idees, a magazine she had edited, was sold by media company Media 24. However, the prospect of starting something completely new led to the launch of Journal/Joernaal.

There is a different spirit of cooperation on the entrepreneurial side of things, which I really love.

“It was a shocking time in South Africa when two big media houses closed down, but as bad as it was, it was the best time to start a magazine,” says Le Roux. “I didn’t want to take over any of the existing magazines because I didn’t want to read any of it. I asked myself what do I want to read and thought – why not do something entirely new that we don’t have in South Africa?”

Le Roux’s journey into the unknown was made easier by the solidarity that exists among the creative community and independent publishers in the Republic. “When I went independent a lot of entrepreneurs that I worked with phoned me and said: ‘When we started, you helped us, what can we do for you?’ she recalls. “And people who publish on their own ask for help. I’ve had lots of meetings with people sharing information and advice. There is a different spirit of cooperation on the entrepreneurial side of things, which I really love.”

Another common trait among smaller publishers in South Africa is an understanding that circulation numbers are not the measure of success, says Le Roux.

“I think the small publishing houses have all let go of ego in terms of circulation,” she says. “In the past everyone was always chasing circulation so that you can get advertising and brag that you are the top circulating magazine. And I think a lot of that has gone away. For most of the smaller publishers it’s about getting to that perfect sweet spot where you charge enough to cover everything and make a profit without worrying about printing thousands extra.”

One the biggest lessons Le Roux learnt while working for big publishers is not to rely on advertising and to keep your overheads as low as possible.

“While at Media24 I had three years from 2006-2009 as a publisher during a horrible time when advertising just went away,” she says. “It gave me the experience I needed to do what I did later on. With Ideas/Idees I just knew I couldn’t repeat the mistakes of the past – I couldn’t have massive overheads, smart offices or a big team.

“Now, with both magazines, I work from home and the rest of the people are freelancers, so my overheads are just about zero. If you have advertising income it’s always something that can go away. So, for neither of the magazines I count on advertising. I create content people are prepared to pay for.”

While digital versions of Journal/Joernaal and Ideas/Idees are available and Le Roux uses social media to promote the magazines, the future of her business will very much remain print based.

“We tested thousands of online stuff and, having found that they don’t bring value to the magazines, we’ve got rid of them,” she says. “We used to attend every single expo with brand extensions and had our own products, but none of that really made a difference or a profit. By cutting that and cutting our ego we actually became profitable.”