When Lucy Hall wants to remind herself why the magazine she edits, BBC Gardeners’ World, has been in such high demand during the pandemic, she only needs to step into her own garden.

“I think gardening has maintained all of our sanity in the last year and, like our readers, I have used it as an escape valve,” she says. “I have fallen in love with gardening all over again and have spent more time in the garden in short bursts. It’s quite literally grounding and having the garden right there while working from home has given me a real connection to what all of our readers are experiencing.”

Lucy Hall has been the editor of BBC Gardeners’ World magazine since 2011. Before that she worked as a deputy editor for BBC Worldwide for nine years.

As scores turned their thumbs green during the Covid outbreak, BBC Gardeners’ World raked in new readers – the magazine’s circulation increasing by 33 percent year-on-year to 227,000 in the second half of 2020. Subscriptions have increased by 37 per cent year-on-year, reaching 162,000, which is 71 per cent of total circulation.

Hall believes the striking figures show the close connection that exits between gardening and print, with both offering something tactile in an increasingly digital world.

“As a brand we have a strong focus on print because we have a visceral connection with the reader when they’re holding something in their hands,” she says. “Gardening is the ultimate connection with nature and it has become so appealing because our connection to nature has become more and more removed – we are screen-based, we live in cities, we see concrete, we don’t see the seasons turning."

Gardening is the ultimate connection with nature and it has become so appealing because our connection to nature has become more and more removed – we are screen-based, we live in cities, we see concrete, we don’t see the seasons turning.

“What has emerged in the last year during the pandemic is everyone’s increased need for wellbeing and health and feeling that they are doing something for themselves – this need for nurture."

“In the last year we’ve seen a move away from simply buying a plant to going right back to the beginning and raising it from a seed or a tiny plant, with a recognition that the process is as rewarding as the end result. Part of that process is connecting with the tactile nature of gardening and holding items - so there’s been a huge increase in people buying tools. Similarly, there is something really pleasurable about sitting back and holding a magazine in your hands.”

A bit of luck and a lot of research

BBC Gardeners’ World’s pandemic success started, says Hall, with a bit of luck but continued thanks to some good judgement. Luck, because the sunny weather at the start of lockdown meant gardening was the most obvious hobby to take up.

“There was no certainty that the nation would turn to gardening at that really difficult time,” she says. “If it had rained and had been cold and snowing for a month people would have gone indoors and turned to knitting and we might have been in a very different position.”

Once it became clear people were increasingly getting their hands dirty in their gardens, BBC Gardeners’ World, which changed hands from the BBC to Immediate Media Company in 2011, was in a great position to serve the gardening community after years of research into how the activity has evolved over the years. 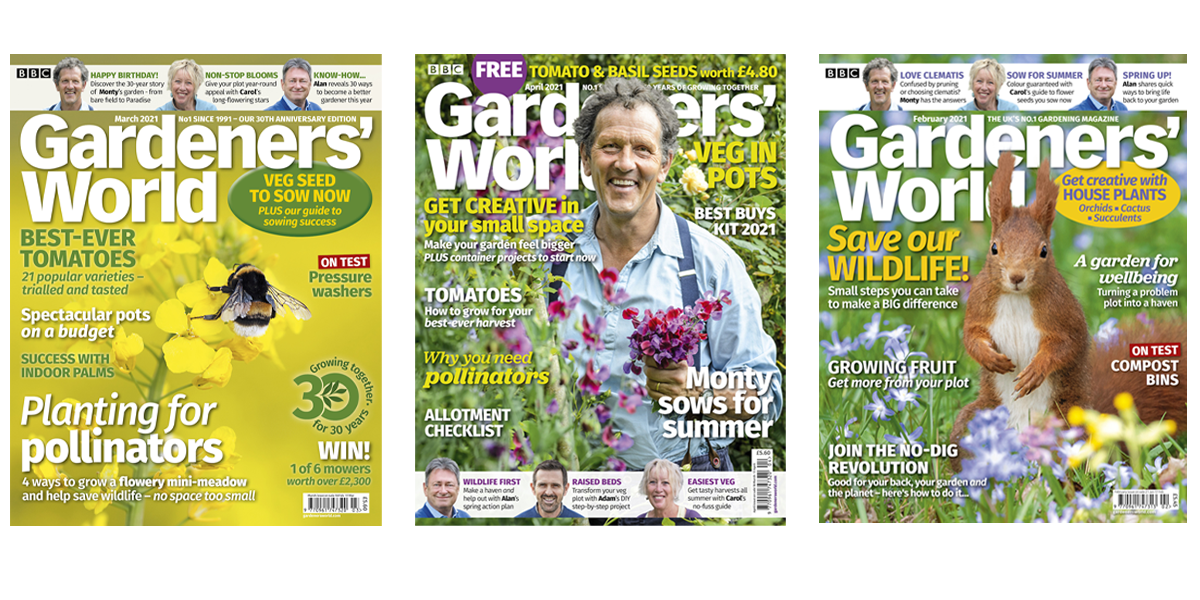 “We worked with YouGov about five years ago to identify new groups and we identified that the gardener of the future was a growing area of opportunity for us,” Hall says. “There was a growing interest in gardening among people who were younger and had families. We were being asked about family projects and we were meeting that demand already. That really paid back for us when that really wide audience came knocking on the door.”

For Hall, one of the most positive changes to gardening has been the growing interest of people in their 30s who don’t always have access to a garden.

“Traditionally your first introduction to gardening is when you buy a house with a garden and these days that is incredibly difficult for young people,” she says. “So there has been a huge growth in houseplants since it’s very rewarding growing something on the window sill."

“We put a houseplant on the cover of the magazine for the first time a few years ago and year-on-year sales went up by 25 per cent. That was the first sign that houseplants were moving from being a niche interest to being a real mass interest. That was when we really started to connect with a younger family audience.”

There is a real desire among the younger audience to share that experience of holding a magazine in their hands. So long as you are relevant, timely and communicate in the way they want.

While drawing a younger crowd bodes well for BBC Gardeners’ World’s future, people who read the magazine are, on average, in their mid-50s. The website, meanwhile draws people in their mid-40s. It’s a disparity that shouldn’t be seen as younger generations turning their back on print, says Hall.

“It’s wrong to say print is inevitably going to die out because the older audience is dying out,” she says. “There is a real desire among the younger audience to share that experience of holding a magazine in their hands. So long as you are relevant, timely and communicate in the way they want.”

Taking control during a crisis

Knowing your audience is one thing, reaching them effectively at the height of Covid is another challenge altogether. As staff at BBC Gardeners’ World left the office to work from home, news broke that WHSmith, one of the magazine’s biggest outlets, was closing many of its branches.

“It was very concerning - like jumping off the cliff and not knowing if the parachute would open,” says Hall. “We had already agreed a lot of promotions but we had to redirect them and Frontline was amazing in redirecting copies out of Smiths and into other stores.

“We could see supermarkets becoming more and more important, and also independents as people started to shop locally. What we also did was to expand our online sales operation to the extent that we became our own second biggest retailer – we sold more copies of the May issue than anyone else but Tesco. We managed to take control of our own destiny.”

With the BBC Gardeners’ World team scattered to all corners during lockdown, Hall had to ensure there was a real clarity of purpose when bringing out the magazine.

“Working remotely has really sharpened up our focus on what are we going to prioritise,” she says. “You can panic and reach out to everything in the hope that something sticks and, in the end, your team’s capacity is your capacity. You have to be sure that you are using that capacity to maximum effect which is even harder when you are not in the same room together.”

Adding to the pressure early in the lockdown was the fact that BBC Gardeners’ World’s May issue is the single most valuable monthly edition for retail sales value in the UK. The 2020 edition was particularly significant since it represented the culmination of a new subscription strategy.

“In the summer of 2019 we felt that we were at a crossroads and wanted to focus even more on what the value was of being a subscriber - to really sharpen up the offering so that it became a no-brainer,” Hall explains.

“We spent a lot of time in that summer thinking ahead to what Spring 2020 would mean for the magazine and the website and how we would turn occasional viewers into an audience we really knew. We looked at what it would take to turn an interest into a subscription. That early work in 2019 was coming to fruition in 202O as the world was turned on its head.

“We launched the May 2020 issue with a whole new chunk of content just for subscribers. The last few pages of that issue were done when lockdown had already started but the outcome was good.”

The demand among readers has been such that BBC Gardeners’ World turned an ad hoc publication of special editions into a more ordered bi-monthly set of themed guides.

“It was lovely to launch those knowing that we had a real demand for it,” says Hall. “The guides are a positive print product outcome from the pandemic.”

The year 2021 is also significant for BBC Gardeners’ World, marking the 30th birthday of the publication. During that time the magazine has remained at the top of the tree of specialist publications by refusing to compromise on quality.

“It’s incredible to look back and think that when the magazine launched it was the first gardening title to be printed in full colour,” says Hall. “Since then it’s always been colourful and a positive source.

“We’ve been the largest selling gardening sector title on the newsstand for 30 years because we have kept the value high for the reader. Where other magazines have been losing pagination we have always argued strongly that we have to keep lots of value on the page.”

The next 30 years are looking bright as well. In addition to print success, the BBC Gardeners’ World podcast featuring the likes of Alan Titchmarch and Monty Don are drawing 170,000 listeners, online traffic is up by 170 per cent and the brand is planning a return of its live events in the second part of May.

Across everything BBC Gardeners’ World is doing, the key to success will remain a laser-like focus of what their audience needs.

“I think it’s a fundamental line to take for any specialist title,” says Hall. “You have to understand your audience and where they are right now and not where they were two years ago. We are lucky enough to be part of Immediate Media who have a really good research team and we draw on that, plus all the data that we can increasingly get from a huge amount of traffic across the website.

“We want to know who our audience is. The content team are all gardeners and they are all putting their ears out there to keep our focus on the reader, the audience and the user. Putting them first means everything else follows.

“While many magazine businesses have been looking at managing decline over the last five years we are in this really beautiful position of actually now looking at how do we manage this growth.”