Publish like it’s 1989: Christian Kallenberg on bringing Pop Rocky magazine back to life

Like thousands of fellow Germans, Christian Kallenberg grew up reading pop culture magazine Pop Rocky – even though the bi-weekly dose of celebrity news and pullout posters was frowned upon in his home.

Christian Kallenberg is the owner of We Like Mags, a Berlin-based agency helping publishers to optimise their portfolio in print and digital magazine media. During his career he’s held various senior positions such as editor-in-chief of FHM, Publisher of L’Officiel Hommes and Editorial Director of Octane. He’s the owner and editor-in-chief of Pop Rocky.

“My mother worked for Bauer Media who brought out competitor Bravo, so I had to read Pop Rocky under the covers in my room,” laughs the publisher, who runs media company We Like Mags. “But I loved it because it had a bit more edge than Bravo. People always said Bravo was like The Beatles and Pop Rocky was more like The Rolling Stones.”

With scores of Generation Xers feeling the same sort of pangs of nostalgia when thinking back to Pop Rocky (which last hit shelves in 1998), Kallenberg spotted a business opportunity. As the magazine reached its 40th birthday last year, he decided to bring it back to life as a bi-annual print magazine you can buy at newsstands or online – pullout posters and all. 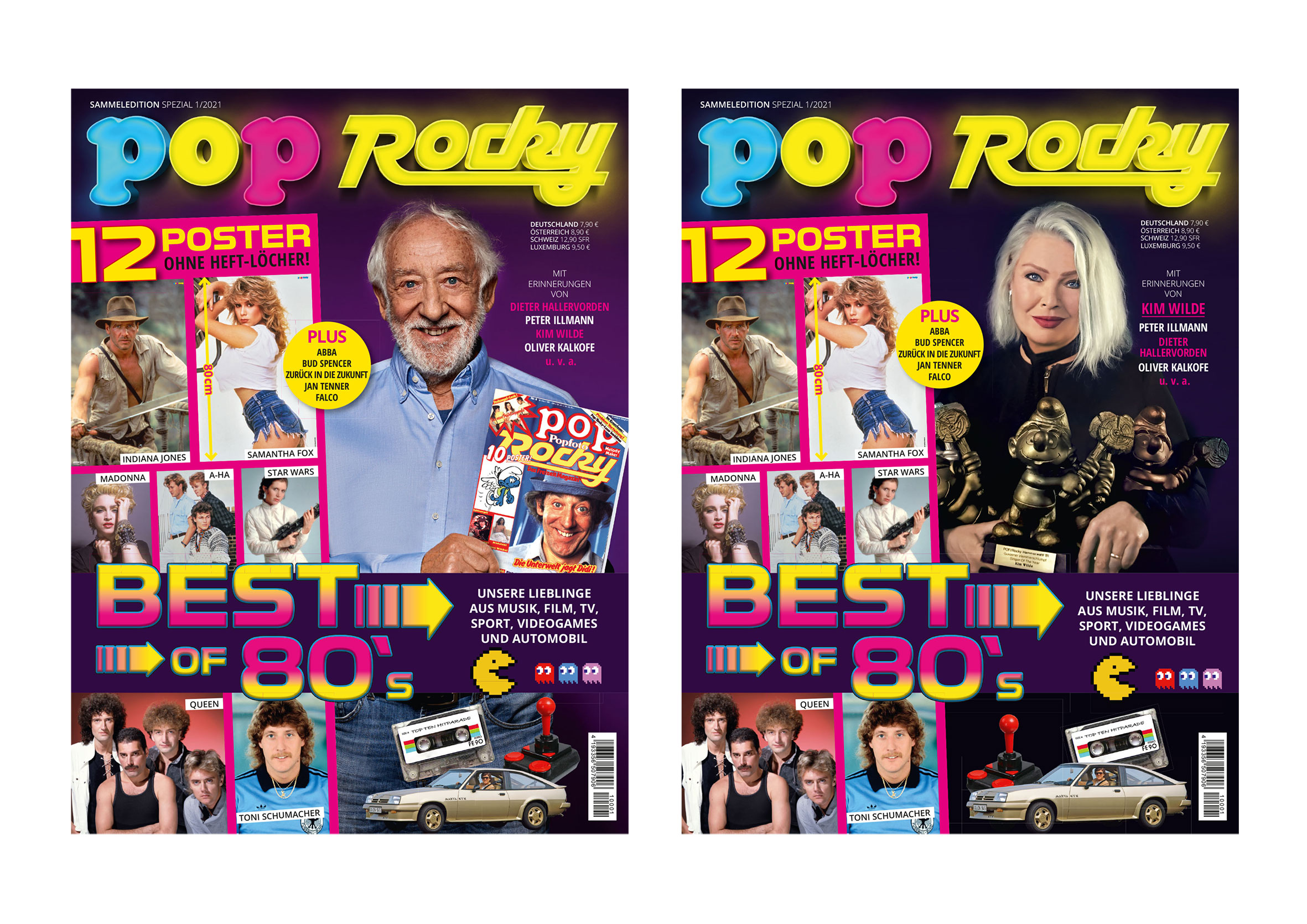 Each issue of Pop Rocky is a real collector's item, whether it's using a good paper stock or making sure the posters are pristine.

An unabashed celebration of the period that gave us Prince, Ghostbusters and David Hasselhoff in a talking Trans Am, the new Pop Rocky catches up with 1980s icons (the relaunch issue had Kim Wilde and comedian Dieter Hallervorden on the cover) while also featuring movie stills and celebrity portraits from yesteryear that conjure up childhood memories for readers.

“When I was sourcing the photos for the relaunch the old pictures brought back so many memories,” says Kallenberg. “And, along the same lines, we have celebrities who write about their personal memories of the 1980s. That’s what makes the magazine so special – it’s not the facts of the 80s but that relationship celebs and readers have with the period. It feeds into the nostalgia that’s out there at the moment, with people perhaps craving simpler times.”

Pop Rocky has had an interesting journey over the last four decades. Starting life in 1980 (with Debbie Harry on the cover) when youth magazines Rocky, Pop and Popfoto merged, it came out every two weeks until the mid-1990s when it went weekly. It was discontinued in 1998 by publisher Marquard Media Group in favour of a new youth magazine Popcorn – despite selling more than 220,000 copies a week at the time.

Each issue is a real collector’s item, whether it’s using good paper stock or making sure the posters are pristine.

“It’s totally insane – the idea of closing down a magazine when you are selling that many copies,” says Kallenberg.  “But that tells you a lot about publishing in the 80s and 90s. They were just throwing cash out of the window.”

Kallenberg started the relaunch process of Pop Rocky with some experience and form. In 2012 he revived another German publication, comic magazine Yps – repackaging it as a nostalgic title for adults until 2017.

“Yps worked really well for 5 years, so I knew the target group,” he points out. “I’m used to producing magazines and I could acquire the rights to the Pop Rocky brand for really no money. I know how to deal with trademark transfers so I thought – I should do this.”

We say on the cover that our posters are not saddle stitched because that tends to destroy their value.

The power of print (and posters)

Given the nostalgia attached to Pop Rocky, it was always going to remain a print publication. And Kallenberg has taken steps to ensure each issue is a real collector’s item, whether it’s using good paper stock or making sure the posters are pristine.

“We say on the cover that our posters are not saddle stitched because that tends to destroy their value,” he says. “It’s something our readers really appreciate and if we didn’t have posters, we wouldn’t have sold as many copies as we have.

It’s also important for the magazine to look and feel good because it’s all about that tactile experience and the print product being something you can savour.

“It’s also important for the magazine to look and feel good because it’s all about that tactile experience and the print product being something you can savour. That’s the way all print is moving.”

While Kallenberg has made good use of the Pop Rocky website, interacting with readers, the digital part of the operation is very much there to support the print magazine.

“I have taken that approach simply because we can’t make any money from our digital activities – we don’t have enough reach and we can’t sell advertising online. Our target group is not as willing to spend money on digital content as they are on print.”

“We have tried to use the website in clever ways. We asked readers to vote for the stars they want to appear on the posters (Samantha Fox proving the most popular) and while it was initially out of desperation because I had so many great photos and couldn’t decide, it led to people signing up to the newsletter.

“So, when we launched Pop Rocky we could send out an email to 500 people saying that the magazine is out now, thank you for voting, and here’s the link to buy it.”

Kallenberg used the same email to promote Pop Rocky merchandise – T-shirts and mugs with a cool retro strawberry logo – and got a very positive response. “I had orders for T-shirts straight away,” he says. “It’s very promising because ultimately we want Pop Rocky to be a nostalgia brand focusing on as many media channels as possible. We are in talks at the moment to launch a top-quality podcast featuring artists from the 1980s and 1990s and will also be looking at hosting events in the future.”

While there might be a demand for Pop Rocky to come out more than twice a year, Kallenberg won’t change the frequency, having learnt valuable lessons from the bi-monthly Yps magazine.

“Nostalgia magazines need that sense of an event around it and you lose that the higher the publication frequency gets,” he points out.

Pop Rocky will also remain squarely aimed at the 40+ age bracket after initial plans to appeal to vintage-loving millennials was shiftly nipped in the bud by Kallenberg’s own 15-year-old daughter.

“I produced the relaunch issue of Pop Rocky pretty much at home during he pandemic and I have a daughter who is into the 80s in terms of fashion and music,” he recalls. “But when I was working in the living room she would walk past and say: ‘Who are all these people?’ She likes the music but doesn’t care about the artists.

“The younger age group have an idea of the 1980s but they don’t want to get into details. At some point I thought – let’s forget about the younger readers and just focus on the age group of 40+ and try to make them as happy as we can.”