In November 2019, Swiss media group Ringier struck a blow for women. To ensure there was a gender balance in the content across its publications, it launched EqualVoice, an initiative built around an AI system that determines whether enough column inches are being devoted to the female perspective. Eighteen months later the initiative is still going strong, with the group’s articles becoming increasingly representative and an EqualVoice magazine being launched this year.

Lea Eberle has been Projektreferentin CFO and Head of Strategy at EqualVoice since 2020. She began her career at Ringier in 2016, working in a number of financial roles. Eberle studied banking and finance at the University of Zurich.

“It’s amazing to see how EqualVoice is put into practice in the editorial offices, and that the visibility of women in the publications has significantly improved in 2020,” says Lea Eberle, head of strategy at EqualVoice. “For example, our business newspaper Handelszeitung saw the proportion of women mentioned in reporting increase from 17 per cent to 24 per cent.

It’s amazing to see how EqualVoice is put into practice in the editorial offices, and that the visibility of women in the publications has significantly improved in 2020.

The latest manifestation of this mission, the EqualVoice magazine, will be distributed with Handelszeitung and other established Ringier titles Sonntagsblick and Schweizer Illustrierte.

“The magazine will be about being different and wanting the same thing,” explains Eberle. “We select key topics in regards to gender equality in Switzerland and tackle them from as many different angles as possible. Equality is key, both in selecting content and people featured and in the way the magazine is composed.

“We will incorporate interviews with scientists and experts. Strong role models and well-known figures inspire readers to reflect their attitudes and contribute to a discussion within Switzerland.” 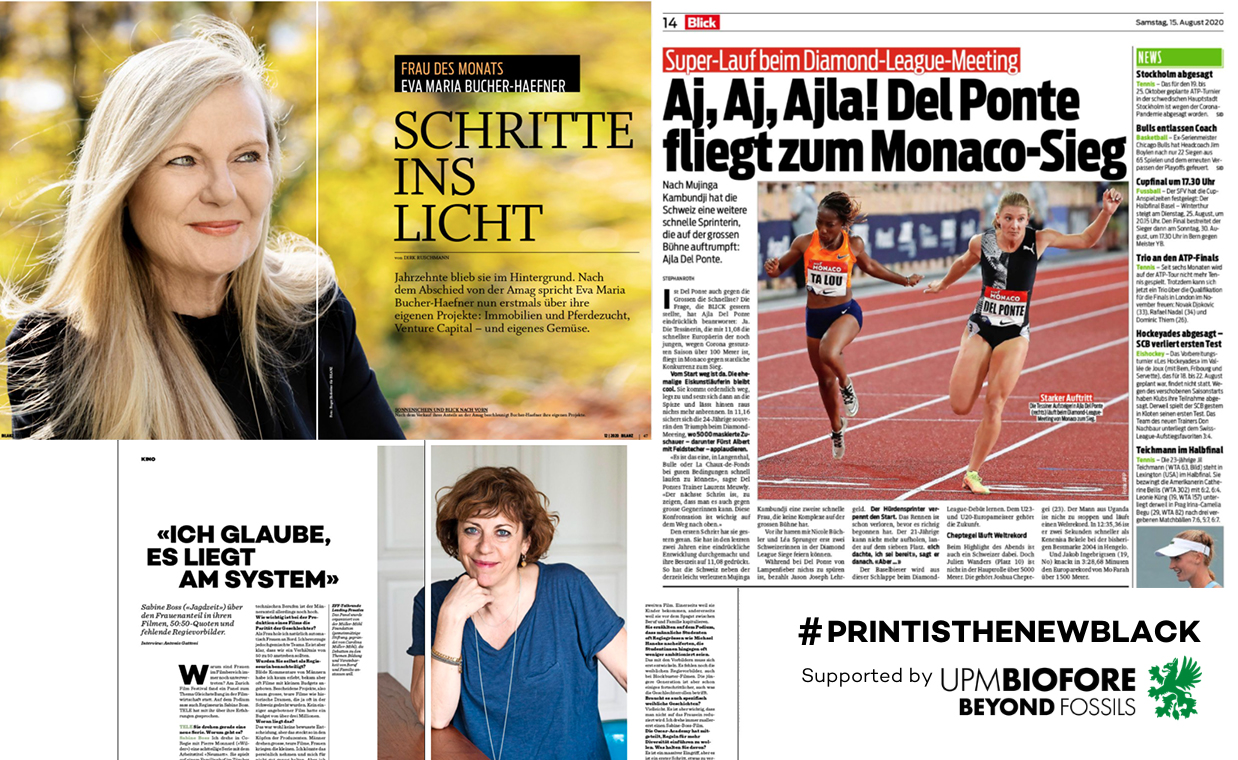 EqualVoice has been succesfully put into practice in the editorial offices, and that the visibility of women in the publications has significantly improved in 2020.

EqualVoice was launched by Ringier CFO Annabella Bassler and is overseen by publisher Michael Ringier and CEO Marc Walder. At the heart of the initiative is a semantic algorithm developed in-house, called the ‘EqualVoice-Factor’, which measures the visibility of women and men in articles published by Ringier and Ringier Axel Springer Switzerland.

Equality is key, both in selecting content and people featured and in the way the EqualVoice magazine is composed.

It comprises two objective indicators: the ‘teaser score’, which evaluates the visibility of women and men in images, headlines and titles, and the ‘body score’, which shows how often women and men are mentioned in an article’s text. The evaluations and key indicators of the EqualVoice-Factor are communicated on a regular basis and used to exact change.

The initiative arrived at a time when worldwide studies showed a worrying disparity between the number of men and women featured in articles. In 2016, the Global Media Monitoring Project, which is done every five years, revealed the global figure when it comes to the focus placed on men is as high as 82 per cent.

And according to UNESCO, even though women make up 40 per cent of all participants in sports globally, they only get 4 per cent of sports media coverage outside main sporting events like the Olympic Games. Even then, female sports stars are frequently represented as women first, and athletes second, with coverage focusing on their appearance, age or family life – something that builds harmful gender stereotypes.

In America, the latest study into men’s and women’s sports news coverage by the University of Southern California (USC) found that 95 per cent of total television coverage, as well as the ESPN highlights show SportsCenter, focused on men’s sports in 2019.

They saw a similar lopsidedness in social media posts and in online sports newsletters coverage, which were included in the report for the first time since researchers began gathering data three decades ago.

Calling in the experts

To address an imbalance in coverage, Ringier has launched an EqualVoice female expert list, to be used by all journalists at Ringier and Ringier Axel Springer Switzerland to ensure more woman consultants make it into publications and onto other platforms.

“Within less than a year, we already have almost 300 female experts on this list,“ says Eberle. “We are delighted to see our EqualVoice female expert list has had a positive impact and more and more female experts are interviewed in our titles. We are convinced EqualVoice is a great journalistic opportunity to discover new and exciting people.”

EqualVoice is a great journalistic opportunity to discover new and exciting people and at the same time promote gender equality.

EqualVoice has had a ripple effect across Ringier, with newsrooms made aware of how unbalanced its coverage was.

“This data has caused the editorial offices to set their own individual goals at magazines and newspapers,” explains Eberle. “We are delighted to see that the visibility of women in the publications has significantly improved in the past months.”

Equality across the board

Ringier’s drive for greater representation goes far beyond the content in its publications. Steps have also been taken to ensure the make-up of its workforce has the right balance.

“We believe that a diverse and inclusive environment is key for our overall success,” Eberle points out. “To strengthen this a Diversity and Inclusion Board has been installed. Our editors-in-chief pay attention to a balanced ratio in the newsrooms and continue to strive to reflect the diversity of society.

“Our employees represent the diversity of society. All people - regardless of gender, origin or nationality, sexual orientation, religion or physical characteristics - are welcome.

“In order to strengthen and maintain diversity, we rely on the continuous questioning of existing measures and on their further development. We create a working environment in which people bring new, valuable perspectives through their individual skills and life experiences.“

We create a working environment in which people bring new, valuable perspectives through their individual skills and life experiences.

Despite the success of EqualVoice, and particularly the EqualVoice-Factor, Ringier is not resting on its laurels. Among some of its new initiatives is an EqualVoice photo challenge called Equalpyxx – a Swiss-wide competition that tasks photographers with taking images that shatter stereotypes, for instance male kindergarten teachers and female mechanics.

“We are convinced that what you can see, you can be,“ says Eberle. “This is why we need both male and female role models.”

Ringier itself is aiming to be a role model within the industry, the media group offering EqualVoice-Factor analysis as a service to other companies.

“EqualVoice is a concern that goes beyond our company, as we cannot achieve an overarching change in society alone,” says Eberle. “No matter whether it’s a media company or corporate communication, every company can have its communication analysed. It has proved to have a positive impact, we now want to inspire other companies to go down the same path.”