It all began with some inspirational words from a princess. The year was 2018 and Sue Holt, Managing Director at ITP Media Group, had arranged to catch up with Saudi Arabia’s Princess Noura bint Faisal Al Saud to discuss a forthcoming fashion project she was working on. As the discussion moved on to manufacturing, logistics, media and buying, something became very clear to Holt – The Kingdom would be the ideal place to launch a fashion magazine.

Sue Holt is the Managing Director at ITP Media GCC overseeing the publisher’s leading media brands including Arabian Business.com, GQ ME, Time Out GCC and Harper’s Bazaar Arabia. She has launched over 20 media brands into the Gulf region and founded the Arab Woman Awards and the Harper’s Bazaar World of Fashion.

“At that stage I’d just started the licensing process for ITP Saudi and Princess Noura wasn’t yet at the Ministry of Culture Fashion Commission,” Holt recalls. “But it was such a robust discussion on how the country could develop its fashion industry that I knew our first media launches should be used to support this nascent sector which has such potential. “

Two years later, in February 2021, two of ITP’s most prized brands, Harper’s Bazaar and Esquire hit the shelves in Saudi Arabia. The bilingual publications are run by an ITP editorial team, including members based in Riyadh, who work with local contributors, stylists, photographers and content creators. They are the first international magazines curated specifically for the Saudi market. 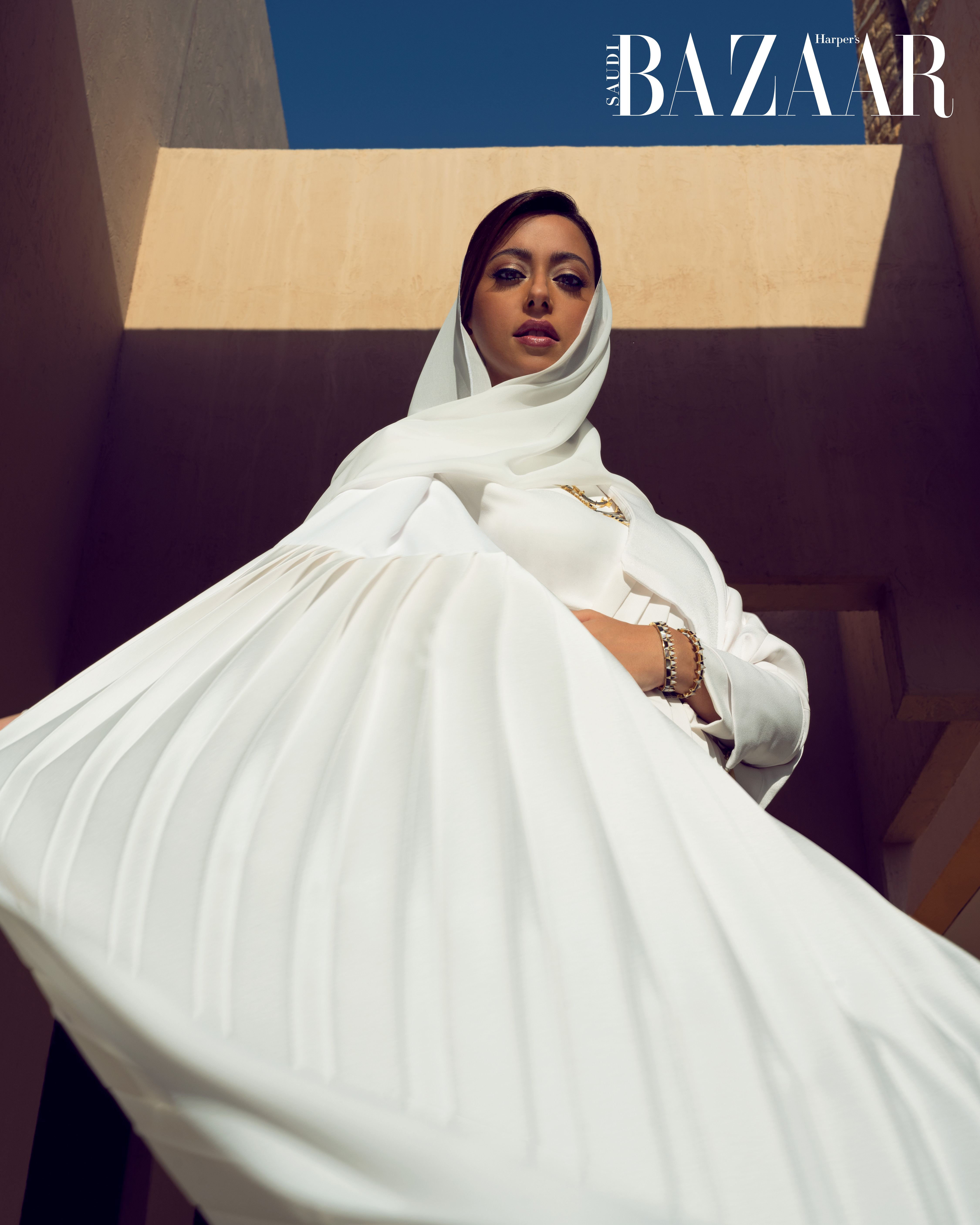 The new launches of Harper’s Bazaar and Esquire Saudi will definitely help to both showcase and represent the people in Saudi Arabia.

“Previously, international and regionally based fashion media were only able to target Saudis when they left the country or, digitally, from outside the country,” says Holt. “This meant the content being created was not specific and often based on assumed or a skewed assumptions of what Saudis wanted.

“And until relatively recently there was no way to feature Saudis in the fashion media unless they’d left the country and were Dubai-based, so more accessible. This led to a severe lack of representation for years, so the new launches of Harper’s Bazaar and Esquire Saudi will definitely help to both showcase and represent the people in Saudi Arabia.”

The launch of the two magazines have implications beyond publishing, with ITP hoping the titles will boost the creative industries in Saudi Arabia by showcasing talent both to local readers and throughout the region.

“This would have the effect of fashion brands seeing Saudi as a viable location for their own campaigns,” says Holt. “As we have Esquire and Harper’s Bazaar editions across the Gulf, including Qatar and the UAE, we know there will be a pick-up from those to rerun a selection of the Saudi content.”

An example of this happening is the cover shoot for the new launches, which were picked up by Esquire Middle East and resulted in great exposure for the creative team involved. The first issues of Harper’s Bazaar and Esquire Saudi featured Taleedah Tamer, the country’s first supermodel, and singer Hamza Hawsawi respectively and had NEOM, the spectacular cross-border city in Tabuk, as a backdrop.

“Our aim for these launches were to cement our positioning of ‘celebrating Saudi talent’ and to make sure that they both reflected and inspired the market they were serving, which can be summarised as ‘ambitious, energetic and proud’,” says Holt.

“Taleedah Tamer and Hamza Hawsawi were selected because they embody this, however the whole teams involved in the NEOM shoot were 90 per cent Saudi nationals including the photographer, Norah Alamri, who did an incredible job.  We wanted to start with the message that there is a wealth of untapped creative talent in this expansive country.”

Our objective at Harper’s Bazaar Saudi is to be instrumental in not only chronicling the incredible social and cultural evolution in the Kingdom, but also helping to engender even more positive change by supporting the female community.

A core goal of Harper’s Bazaar Saudi is to embrace and uplift Saudi women who, the magazine promises, will be at “the very heart” of everything they do.

“Our objective at Harper’s Bazaar Saudi is to be instrumental in not only chronicling the incredible social and cultural evolution in the Kingdom, but also helping to engender even more positive change by supporting the female community,” says Holt. ”We believe that we have a responsibility to do so, and that our new presence in Saudi will continue to build on this fundamental pillar of Bazaar’s mission since its inception in 1867.

“We’ll be putting this into action first and foremost through encouraging Saudi women to tell their own stories in their own voices; handing them the mic, and the lens, and creating the space for them to spark conversation as well as further inspiration.”

The launch issue of Harper’s Bazaar Saudi showcased the abundance of incredible Saudi women, not only featuring Taleedah Tamer on the cover, but also bringing together a team of local women to do the styling, photography and hair and make-up.

One of the main challenges for ITP when releasing print publications was to ensure the magazines had both a local and international flavour – staying true to the approach that made Harper’s Bazaar and Esquire so popular, while also respecting local values.

The fact that the company has been operating in the Gulf region for over 30 years, and had a big online readership in Saudi tied to Harper’s Bazaar and Esquire, meant they were already tracking audience preferences before launching new print products.

To further ensure that the magazines hit the right tone, contributors were also carefully chosen. “The selection of our team and particularly our contributing editors were extremely important to us to get this delicate combination right,” Holt points out.

“The magazine content across all platforms should both reflect and inspire their audiences - from ensuring that the people featured are relevant to covering topics from different angles.”

At a very early stage in the process of establishing ITP in the Kingdom, Holt also met with members of the Media Ministry to discuss the guidelines on social media influencers since ITP Media Group owns the Gulf region’s largest influencer agency – ITP Live.

I believe premium print titles will be desirable in this market for a number of years to come. We’ve been inundated already with subscription requests for both editions.

The future of print in the Kingdom

While Harper’s Bazaar and Esquire Saudi have only been in the market for a few months the titles have already raked in the readers – an encouraging sign for print publications in the region during a time when, globally, publishers are increasingly moving content online.

“I believe premium print titles will be desirable in this market for a number of years to come,” says Holt, assessing the future of print in the country. “We’ve been inundated already with subscription requests for both editions, plus luxury fashion is still arguably a magazine sector where its readers enjoy the physical copies to pour over the visuals.

“Mid-market or mass magazines print will be more for marketing and visibility purposes to support the overall brand offering. This would need to be heavy on mobile content and interestingly experiential to reflect the market needs.”

With Saudi Arabia pushing ahead with economic diversification, B2B magazines have, says Holt, an increasingly important role to play as a link between different sectors in the country.

“The role of B2B magazines will be interesting because, with the mass development of the country, there is a requirement to bring together sectors through strong media brands in aligned sectors including construction, hospitality and travel,” she says. “Format-wise these should be multi-platform and include large networking events as this is a country where personal interaction and networking in business is still considered extremely important.”

Whichever media brand enters the local market, ITP is eager to lend a helping hand. “We will also be launching a service for international media brands wanting to enter the Saudi market,” says Holt. “We appreciate this could seem like a daunting prospect for companies outside of this region.”

By launching Harper’s Bazaar and Esquire Saudi during a period when the Kingdom is evolving at a rapid rate, ITP finds itself with a front row seat to one of the most dynamic emerging fashion scenes in the world. Keeping up with changes and influencing the styles that will be coming down the runway is something Holt absolutely relishes.

“The fashion scene in Saudi is quickly developing and is therefore extremely exciting,” she says. “Currently there seems to be an interesting mix of the influence of the heritage of the country but with a modern twist.

“I think it is too early to yet say what is truly ‘Saudi style’ particularly for the younger Saudis. But we look forward to being able to be on this journey and present the no-doubt different iterations of this that will emerge in the next few years.”